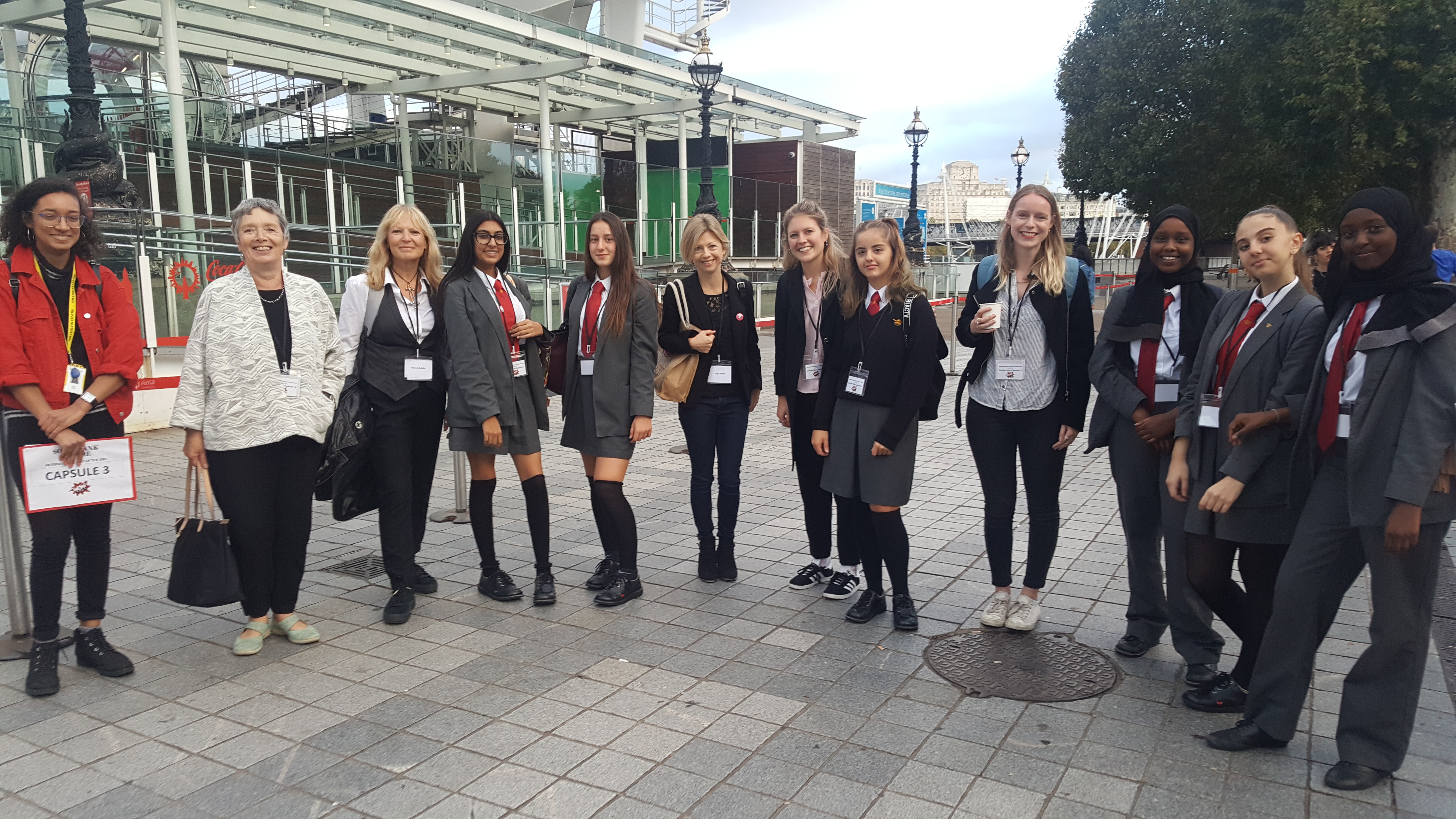 The day dawned bright and a bit too early, but I was at the Royal Festival Hall on the South Bank for 7.30. I had been invited to mentor some schoolgirls as part of the International Day of the Girl in the appropriately high flying London Eye. We were divided into groups of 6 female mentors and six girls. Our group were from a mixed comprehensive in Enfield, in Year 10 i.e. aged 14-15. The teacher accompanying them teaches citizenship and sociology, and the girls were all preparing to take citizenship GCSE one year early.

Our group of mentors, mentees, their teacher and a facilitator from Women of the World festival (WOW) set off down the South Bank to the London Eye.  We boarded our pod and set off gracefully into the air. The format for the speed mentoring was as follows: each mentor had three 15 minute sessions with three of the girls in our group. As soon as time was up we stayed put and the girls all moved round one.

The focus of the discussion was on their education and possible careers, with the aim of brainstorming to help them explore options or opportunities.  Now I don’t spend much time hanging out with young teenagers, and it was utterly fascinating. Each of the three girls I mentored was articulate, had lots of ideas and was pretty confident, certainly more than I remember being at that age.

Teacher and mentees on the London Eye, IDG 2018/damesnet

Their aspirations in terms of possible careers ranged from family law to some form of medicine to music and entertainment, and we had very interesting discussions round these topics.  Two of the girls I spoke with were on their school council and the third decided she wanted to do so too. Interestingly they all highlighted an issue at the school that was bothering them: a new male headmaster had joined the school the previous year and was much stricter than the previous female head.

So far so good, except that he has instituted a rule that they all considered extremely unfair: if a girl is found to have rolled her skirt over at the waist so as to shorten it she gets an automatic half hour detention.  Now some of the girls in our group had quite short skirts, but what seemed to be at stake here was the messy look created by rolling over the waistband. However, if a boy is found with his shirt untucked and hanging out of his trousers then he only gets a warning. And this in 2018!

This information was not music to my ears, and as a dame I thoroughly enjoyed encouraging my mentees to come up with suggestions as to how this inequality could be redressed. I wish them luck with this.

Our trip on the Eye ended after an hour having made two complete revolutions, with the last 15 minutes for photos and informal chatting. Then we said our farewells and went back to the Royal Festival Hall, where we mentors had a welcome coffee and pastries. We then sat round and listened to two very inspiring women: Jude Kelly, founder of WOW and Julia Gillard, the former Prime Minister of Australia. 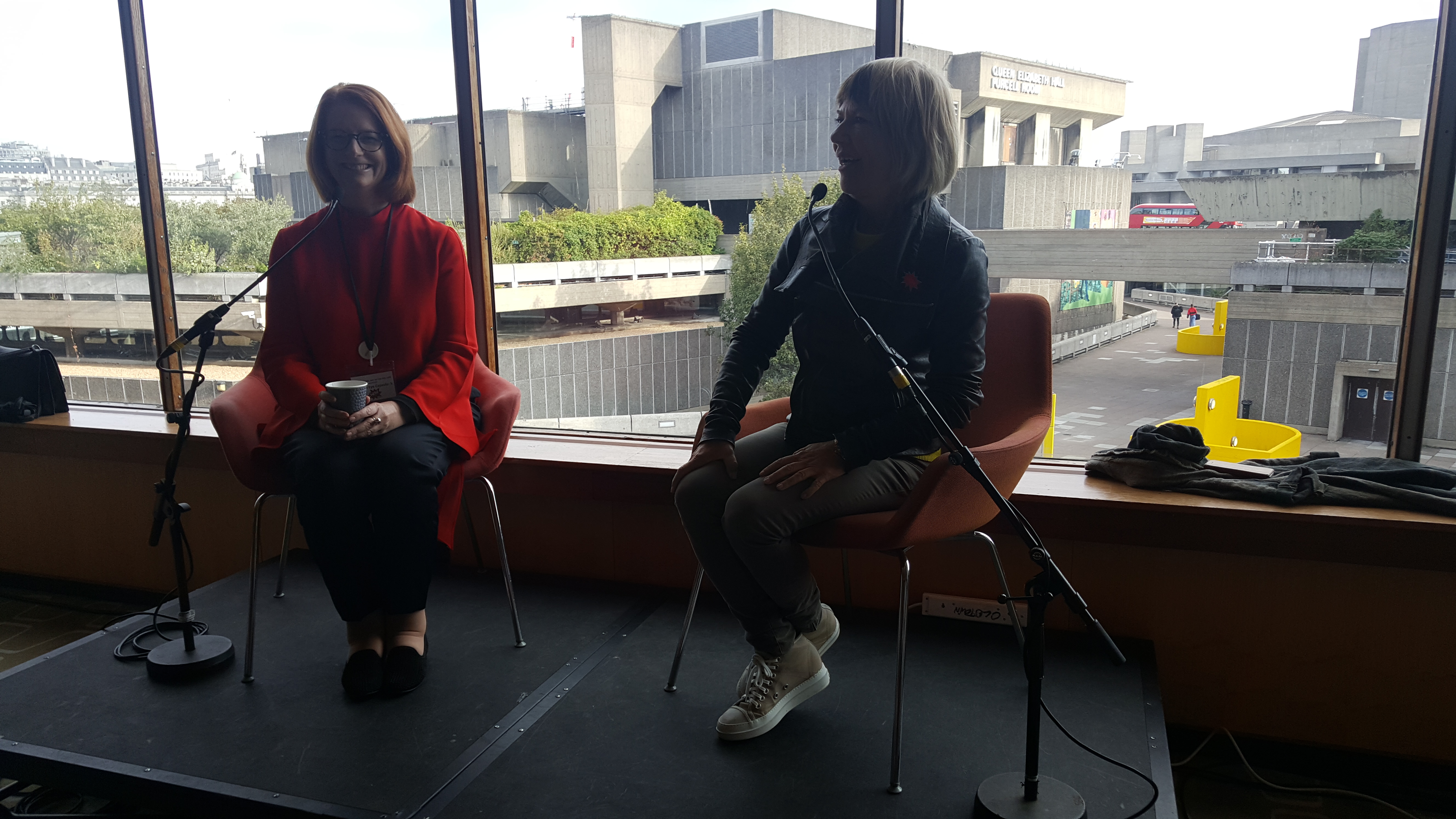 Gillard was asked about the Global Institute for Women’s Leadership that she has established at King’s College London.  Launched in April of this year, it will bring together rigorous research, practice and advocacy to better understand and address the causes of women’s underrepresentation in leadership positions across sectors and countries, and the way gender negatively impacts the evaluation of women leaders.  It will work to create a world in which being a woman is not a barrier to becoming a leader in any field, nor a factor contributing to negative perceptions of an individual’s leadership.

Enough said; it was a fascinating and thoroughly enjoyable time, and I was very fortunate to be part of it.